The mysteries of Big Ten Conference Alignment have become much clearer in the last couple of weeks.  Although no final announcement has been made, comments from Athletic Directors across the league have made it possible to predict the final outcome of Big Ten Division alignment.

Wisconsin and Iowa will be split into separate divisions.  Barry Alvarez has made this very clear, when he told the Wisconsin State Journal the following.

Wisconsin athletic director Barry Alvarez told the Wisconsin State Journal that his Badgers will not be placed in the same division as rival Iowa.

In addition, We know the Divisions have been already set, and the league's current focus is on creating the schedule.  Jim Delany has made this clear as well, saying to ESPN.

"We've got the divisions, but we really don't have the schedules," Delany said. "The key critical area is we already had schedules [set] for '11."

We also know Brett Bielema and ex-Cornhusker Barry Alvarez would like to have an end of season game with Nebraska and have been lobbying for it.

But it looks like Tom Osborne and Nebraska would rather have Iowa yearly.

We also think Wisconsin and Minnesota will be in the same division.  This is also from Alvarez.

Alvarez told the Associated Press that at least one of the Badgers' rivalries would be protected for divisional play, with the Wisconsin State Journal speculation it being the most played game in Football Bowl Subdivision history -- Wisconsin vs. Minnesota for Paul Bunyan's Axe.

What is almost certain:

Ohio State and Michigan will be in Separate Divisions.  Both Athletic Directors Brandon and Smith have spoke to this, as well as a curious comment from OSU's President Gee when he said the following.

“We want to beat them twice,”

That very un-presidential comment created a firestorm in the state of Ohio, basically confirming the Michigan v. Ohio State game would almost certainly be moved up in the schedule.  This has sent Gee and Smith into a Buckeye Back-peddle, trying to back off the statement before anything has been finalized.  This was Gene Smith a couple of days ago.

Smith said there was an all-day meeting in Chicago for the ADs this Monday, with a conference call scheduled for next week. He believes the divisions will be finalized soon, and then the talk will turn to scheduling

An obvious contradiction to what Delany had said earlier about division alignment being complete, and schedule becoming the next order of business.  But thats what happens when a University President opens his mouth too soon.  Nice work President Gee.

I must admit I like watching Smith and Gee scrambling for cover when the truth is they have probably already agreed to the Divisional Alignment with UofM and OSU in separate divisions.


With what we know I believe Big Ten Division alignment will look like this.

Last Week of The Season:


Northwestern and Illinois could easily be interchanged with Purdue and Indiana.  With that said I believe they stay paired wherever they end up, so they can play their respective rivals the last week of the regular season.

I believe Michigan v. Nebraska is a better choice as an end of season game then Michigan State for two reasons.


The soap opera which has been Big Ten Expansion and consequently Big Ten Division Alignment is soon to come to an end.  Delany has said it will be decided by mid September.  I have been racking my brain trying to be at peace with a conclusion.  The above alignment seems to make the most sense to me.

Hilter Weighs in on Michigan and OSU being in Separate Divisions

Hitler Reacts to OSU and Michigan in different divisions @ Yahoo! Video
Posted by Bill Armstrong at 7:38 AM No comments:

Posted by Bill Armstrong at 6:28 PM No comments:

Troy was injured in practice today and by all accounts it is ugly.

The Message Boards have written off the entire season because of one player. This is hilarious in my opinion.

Yes, Troy Woolfolk is an important player on this University of Michigan Football Team, he is a senior leader anchoring a depleted CB position. This news stinks, no doubt.

Who will step up?

JT Floyd, Buck, Courtney Avery or Terrance Talbot will have to fill the void.

Go Blue.
Posted by Bill Armstrong at 3:57 PM No comments:

Tony Posada from Tampa's Plant Senior High School has given is verbal commitment to the University of Michigan today.

According to Scout.com, Posada 6-5 325 lbs is the 75th ranked OT in the country and is rated a 3 star recruit.

That makes 10 for the Wolverines so far this year.

Go Blue!
Posted by Bill Armstrong at 3:07 PM No comments:

MGOBLOG says it is a done deal.
Posted by Bill Armstrong at 11:57 AM No comments:

Troy Woolfolk Weighs In On The University Of Michigan's QB Competition

Troy Woolfolk is a senior leader on this years University of Michigan Football Team. It didn't take the star CB long to stir the pot in regards to who should start at QB for the Wolverines this season.

Woolfolk made it known that Denard Robinson has been the player who has worked the hardest toward that goal. In addition, Woolfolk called out Tate Forcier's work ethic, and insinuated if Tate hadn't played so well early last year, he would have run the risk of being excommunicated for his lack of participation during voluntary 7-7's this summer.

Here is what Troy said.

"Denard has been out there through the thick and thin and been out there all the time regardless if he's hurting," Woolfolk said. "And Tate, he tries to come out, but he's not as consistent as Denard is. And that's allowed Denard to jump a little bit ahead of Tate and I think that Tate's going to have to do a lot of work to catch back up to Denard in camp this year." …

"I personally have a lack of respect for them [players who don't show for voluntary workouts]," Woolfolk said. "The outlook on them is kind of diseased. Like you don't want to be hanging around those people because they have bad work ethic. But at the same time, it's my role to try to persuade them to come out more."

According to Woolfolk, Forcier hasn't shown up to as many workouts as he and the other seniors feel he should have, and Woolfolk said it's hurting his teammates' perception of their signal caller.

"The only reason he's not really labeled as diseased is because of the way he was able to carry the team last year before we started losing. People still trust him a little bit, but he's starting to lose that trust."

Either Troy has had enough of Tate and his lack luster effort to solidify his place as QB for the Wolverines, and is firmly in the Denard Robinson camp, or he is a great motivator and is trying to light a fire under the young QB's ass, knowing he can take this team to the next level.

I believe one thing for sure. This belief is based on no personal knowledge whatsoever. But here it goes. I believe Troy Woolfolk placed one or both of these votes during Big Ten Media Day.

First I would bet a Ham Sandwich Troy was the person who placed this vote for Denard Robinson.

Second, I would not be surprised if he placed this vote for Tate Forcier as well, after reading his comments about Forcier's less than professional attitude toward his position and the team in general.

With that said, it is more likely Wide Receivers like Wisconsin's Nick Toon or Purdue's Keith Smith or both were chosen by the head strong CB. Troy is U of M's best CB, who loves the competition of covering the other teams number one WR, and probably couldn't pass up the opportunity to show his dislike of the position.

Not to mention he is a team leader, but what if he feels like me and others, that believe the best thing for the team is Denard Robinson?

No Matter, I love the passion behind Woolfolk's comments. It is obvious he desperately wants to be part of Michigan's Football Renaissance, and is taking his leadership role seriously. I just hope Tate Forcier can do the same.

Quite honestly though, in my opinion, Tate's fate has already been set. I believe once Denard takes over the starting job, he will not look back until the last game of his senior year, barring injury. I also believe we will be saying Denard Robinson not only ushered in the Rich Rod era, but also brought a Big Ten Championship back to Ann Arbor, positioning the Wolverines for long term success.

For more information on this story, mgoblog.com has done some excellent reporting on this situation, much more so than my speculative rant.

What Size Big Ten Do You Want?

How Many Wins for Big Blue This Year?

First TD of the Year.

Posts To Look For:

Player of the Week:
Recruiting Spotlight:
Hairless Nut Award:
Message Board Know it All:
Memory Lane: 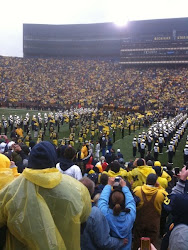 The Rest of College Football

View From My New Seats. 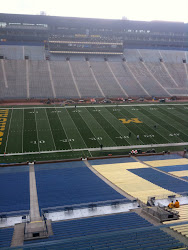 It Only Took U of M Building An Addition To The Stadium To Free Up Some Season Tickets.

Bill Armstrong
As a life long Michigan Fan now living in Tennessee, I'm starved for information regarding my Michigan Wolverines and the Big Ten in general. This site is dedicated to keeping connected with all things Michigan.